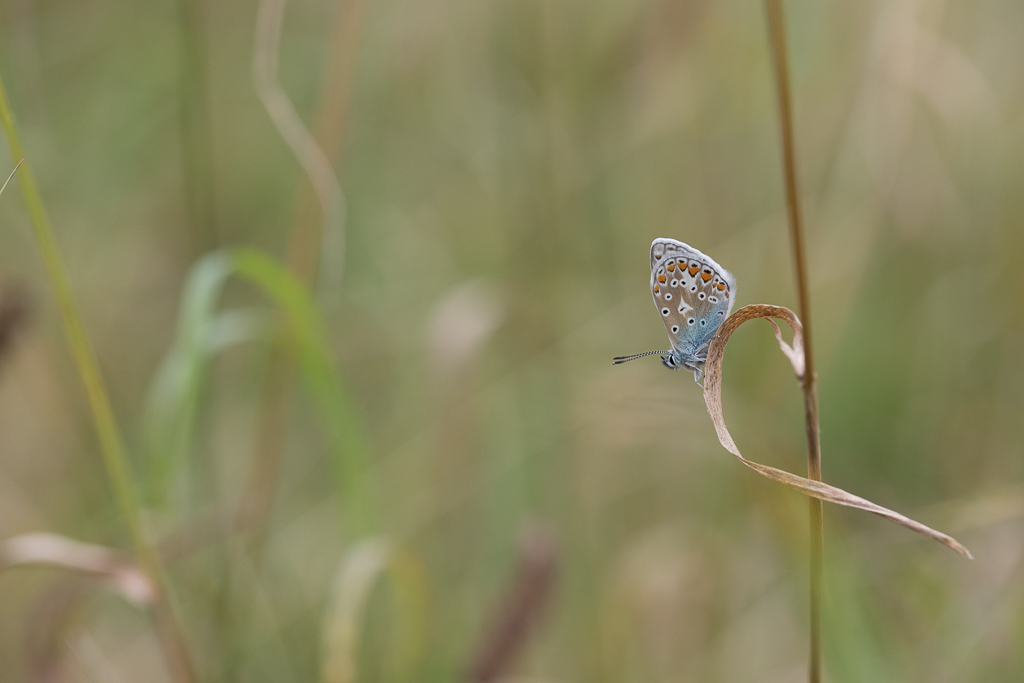 The year is nearly over and I’ve been looking back at the wildlife I saw on Longrun Meadow over the past twelve months. Here are some of my wildlife highlights of 2017. 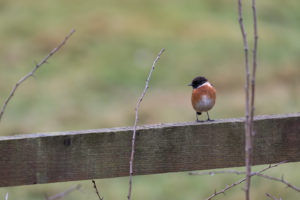 A stonechat sitting on a fence.

In January, I saw a stonechat for the first time. I was walking along the path from Tesco when I spotted it hopping from the fence into the tall plants and back. It wasn’t bothered by the people walking past so I stopped to watch it. It was quite successfully finding grubs in the undergrowth, taking them up to the fence and then bashing them on the wood. A stonechat has been seen on the meadow again this winter, so keep a look out. 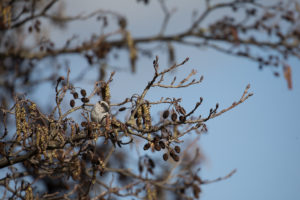 A Long-tailed tit in an alder tree.

By February spring was just starting to get under way. The resident birds were still going about their lives and one of my favourites is the long-tailed tit. They are usually seen in a mob moving along a hedge or in this case, along the alders by the river. Because they’re fast, I always struggle to get a decent picture of them, so this is one I’m still working on. 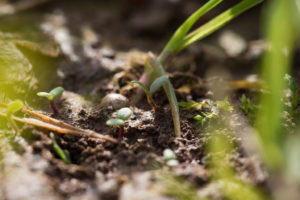 In March lots of people came to help plant wild flower seeds to help restore the meadow in cathedral field and it didn’t take long to see signs of growth. Hopefully we will see some of those plants flowering in 2018. I’m looking forward to seeing how the meadow grows next summer, watching all that work pay off. 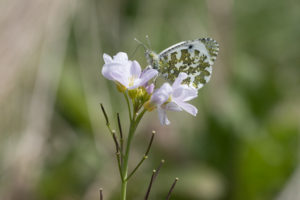 April’s highlight was on cathedral field too. The cuckoo flower complete with an egg-laying orange tip butterfly was a new find for me. After the adult had gone, I was able to look more closely and see quite a few eggs and I came back later to see the caterpillar. 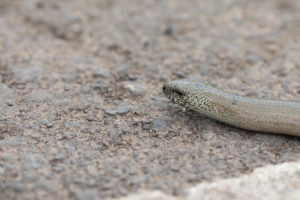 In May, my family and I were heading to a Wildlife Watch event and we were very excited to spot a slow worm. I haven’t seen a slow worm for years, and it was a surprise to see one in such a busy area. Because it was struggling to cross the cycle path we decided to give it a little hand and moved it to the grass next to the path. It disappeared very quickly after that. 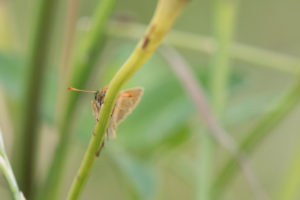 In June, Keith showed me how to tell the difference between two of the butterflies that there are plenty of on the meadow: a small skipper and an Essex skipper. The crucial detail is the underside of the tip of the antennae, so you need to be at the right angle, and not scare the skipper away. The Essex skipper has black tips, while the small skipper has orangey brown. 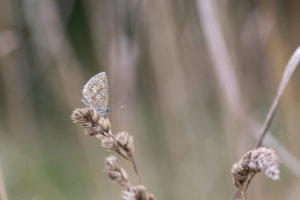 July brought out another of my favourites, the brown argus butterfly. At first glance, they look like a female common blue, but there are a few ways to tell the difference. In flight, the brown argus often looks slightly silvery, it’s a bit smaller and it has no blue scales. Female common blues can be quite variable, so while they might be obviously blue, they could also be mostly brown. If you get to see it land, you can check the spots on the underwing. There’s a guide to the differences here if you want to know more. 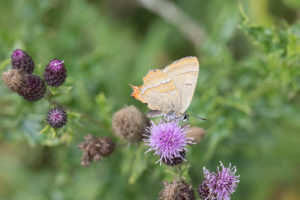 August was the month for spotting another butterfly – the brown hairstreak. We’re fortunate to have a population of these locally, though you still need an extra bit of luck to see one because they tend to spend their time in the tops of trees, or hiding in hedges. I was lucky enough to spot a few this year. They have laid plenty of eggs on the hedges around cathedral field, so I’m hoping 2018 will be another good year for them. 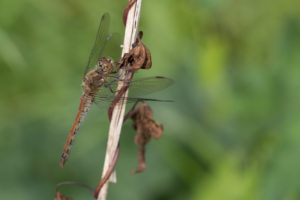 By September, the butterflies were starting to disappear, but some dragonflies were still going strong. Common darters are small dragonflies that often land on paths or prominent perches, making them easy to spot – or even to follow along a path. The males are reddish brown and the females greenish brown. If you move slowly enough, you can see them up close without startling them. 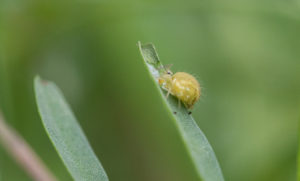 In October, while searching a patch of tare and vetch for seed pods, I spotted this springtail. This one, Sminthurus viridis, also called a Lucerne flea, is quite large for a springtail – but still pretty much just a tiny green speck. Collembola are one of my favourites, so spotting a new one always counts as a highlight. 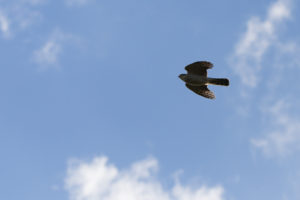 Sparrowhawk flying over the meadow.

November means the end of autumn and and having to look a bit harder for plants in bloom for #wildflowerhour. While I was sitting under a tree trying to decide if a small yellow flower was a hawkbit or a hawk’s beard, the birds in the hedge behind me suddenly started making a huge racket. I turned around to see a bird of prey sitting in the tree. It stayed for a few minutes before flying away. I think it was a sparrowhawk because of its yellow eye. 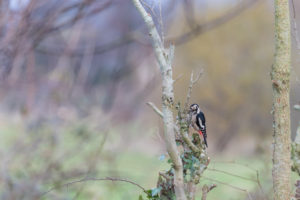 Woodpecker in the unfinished hedge.

By December, wildflowers are thin on the ground and most insects are out of sight. But with the trees mostly bare, it’s a lot easier to see this favourite: the great spotted woodpecker. This one is a female – it doesn’t have a red patch on the back of its head – though I’ve also recently seen a male down by the river along with a green woodpecker.

I’m looking forward to seeing what we’ll see in the meadow in 2018, whether it flies in, walks in or sprouts out of the ground. If you’ve got a favourite sighting from 2017, or you spot something new in 2018, you can share it with us on facebook or twitter @LongrunMeadow.