The sun is finally coming out and the meadow is making the most of it – especially its tiny residents. Among the longer grass at the field margins, I saw lots of black, furry flies. These, I think, are St Mark’s fly, Bibio marci. They are lazy fliers and often sit on their own or in mating pairs; the male and female look quite different from each other (the female is the one with the smaller head and eyes). 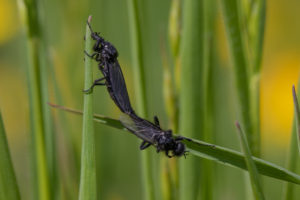 There are cuckooflowers all over Buttercup Field (the one with the bike ramps), Cathedral Field and on the raised banks in Flood Field. These are the favourite egg laying spot of the orange-tip butterflies that are on the wing at the moment. I spotted several eggs already laid on the flower stems and several males in flight, though I only saw one female. She was having a rest and warming up (no orange tips to their wings – but you can see the beautiful green pattern of the underwing showing through the lower wing). 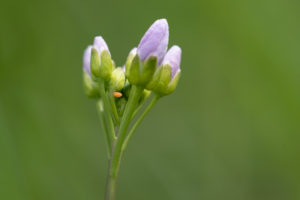 There is a purple puddle at the base of one of the willow cathedral’s columns made by a mat of slender speedwell. 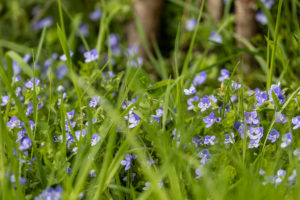 I stopped to watch the bees in the dandelions – this first is Andrena cineraria, or ashy mining bee. Its black body with only two whitish bands make it one of the easiest bees to identify. 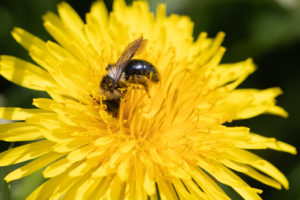 And because I stopped and was sitting still, I also saw this tiny bee on a cuckooflower. My bee ID skills need some work before I can say what it is and it flew off before I even got the book out of my bag so I won’t even try to guess. 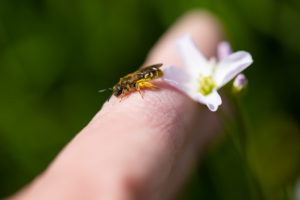 On my way home I saw another bee (much larger than the last but still smaller than a honey bee), warming herself on the bank of one of the attenuation tanks. You can just make out her orange tail, which I think makes her Andrena haemorrhoa, the orange-tailed mining bee.

Enjoy the sun while it lasts!