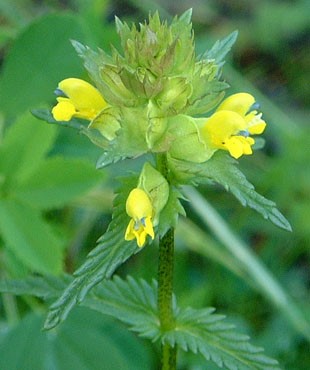 The Friends have been sowing wildflower seed to help diversity the plants in Cathedral Field. The seed will germinate into wildflowers that will bring colour and diversity to what was once just a grass field.

The yellow rattle sowed in 2015 flowered well in 2016. It germinated quite late in march and April, flowered in June and started setting seed in early July. The farmer took a hay cut in mid July, and in the autumn harrowed the grass to pull out some of the grass thatch.  On a farm this would normally be done by the livestock through ‘aftermath grazing’ (= grazing after the hay cut). On 20th October the Longrun Meadow Conservation Volunteers  sowed small patches of wild flower seed, mainly  yellow rattle seed, common knapweed  and oxeye daisy,  in Cathedral Field, very close to the willow cathedral so that once the seed germinates and begins to flower in a few years time it can be seen from the seats inside the willow structure.  The group had to make small scrapes in the grassland to allow the seed to reach the bare ground.  Next year we hope to see even more yellow rattle which helps to suppress the growth of grass and then gradually a greater variety of wild flowers.

Wildflowers on the run